This means wider color ranges than a traditional digital press, and prints with more vivid and saturated colors, especially among the greens and purples.
In addition to the specific formulation of Simitri HDE toner, a big advantage of the high chroma technology is that it supports RGB rather than CMYK management, making it attractive to photographers and those involved in the reproduction of photo books.
This digital release is NOW available in North America, Asia and Europe as the bizhub PRESS C71hc, but a PRO version is also available on the European market.
Share this news item 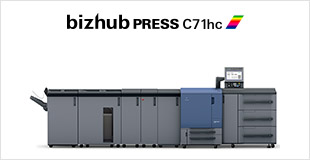