EFI, the Silicon-Valley-based printer and software producer has announced that it has acquired two printer manufacturers, Reggiani Macchine and Matan Digital Printers.

Spending 188 million dollars in a single day, EFI has taken a further step in a stated acquisition strategy to widen its line of grand format digital printing equipment.

EFI's purchase of the Italian company Reggiani Macchine - one of the world's largest manufacturers of digital, water-based inkjet textile printers - might end up costing $140 million, including paying off business debts and subsequent payments to former shareholders based on future revenues.

The EFI CEO has been widely quoted on the subject of the Reggiani buy-out, stating that it is a highly strategic acquisition. It brings EFI expertise and products in the digital textile printer market, which is only just starting to swing from analog to digital. Founded in 1948, Reggiani manufactures both digital and traditional printers, but in 2014 75 percent of its revenue was from digital. The company has customers in 120 countries and distributors in over 40.

Both Matan and Reggiani shareholders and employees are very happy with the deals, and are optimistic about the future. For both companies, being acquired by EFI will mean massive resources in terms of marketing, sales - and software. 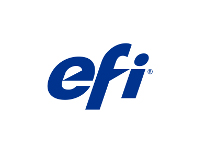