The Xerox Print Service for Android, an extension module (plugin) for Android based on the Mopria standard - is compatible with Android 4.4 (KitKat) and later versions of Google's mobile operating system.  This solution allows any application on the phone or tablet that has the print function to print. In addition, it allows the use of advanced features such as secure printing, and some finishing options such as stapling.

Xerox has also announced the release of the third version of Xerox Mobile Print Cloud.  This is the public-cloud-hosted variant of Xerox Mobile Print, and version 3.0 offers the possibility of releasing a job through a numerical code.  This possibility was until now available only in the "on premise" (locally installed) version of Xerox Mobile Print. The cloud version of Xerox Mobile Print also now supports usage billing (depending on the number of print jobs), which is ideal for small- to medium-sized organizations for which the on-premise version would be unlikely to be cost-effective.
Xerox Mobile Link is rather original.  We are already familiar with multifunction touch screens with a tablet look and feel (drag and drop, or even zooming for those which have multi-touch screens) and multifunctions whose interface is a real tablet with an Android operating system (see the latest Samsung outputs in this area).  Xerox, for its part, is bringing the multifunction controls to the user's preferred touch-screen interface - his or her phone or tablet!  This first version of Mobile Link already allows the user to run a scan from your iPhone (an iPad version is also available, and the Android version is under development): the only activity required at the multifunction is to position the sheet scan in the feeder. The point is to allow the user to set his or her own custom "OneTouch" workflows (one-touch scanning to one or more predefined destinations), which will be personal since they are saved on his or her own mobile device.
Share this news item 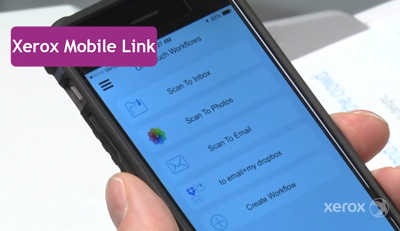