With its avant-garde decor and stunning light show, the theatre presented by Landa at Drupa 2016 - presented by Benny Landa himself - was as glitzy as a Hollywood première, and led many to draw a comparison with a Steve Jobs Apple launch.  A true master of both promotional marketing and the graphic arts, the Israeli entrepreneur (creator of Indigo) took to the stage to present nano-metallography, the latest technology developed by Landa, as well as to assure us that his printers are really nearly ready for market.  He did no fewer than five shows of 30 minutes every day, and we were lucky to get VIP tickets to one of them.

In 2012, Benny Landa made his comeback at Drupa showing prototypes of six digital presses based on a new technology centered on a new type of ink, NanoInk, and a printing process called NanoGraphy.  The pigment particles of this liquid ink are extremely small, measured in nanometres not microns.  We have yet to see the technologyv in commercial use.  Nevertheless, this year, the manufacturer invested in a stand of 3000 m² (nearly twice that of 2012)  to present three working Nanographic digital presses, the Landa S10 (seven colors) for commercial printing, the S10P for folding cartons and point-of-purchase materials, and the W10 for flexible packaging and cardboard.
"After fourteen years of nanotechnology research, we have been able to make remarkable breakthroughs on print quality, speed and on the cost of printing.  Our presses produce offset quality, now run at offset speeds and at a cost per print which competes with offset - on virtually any type of paper," says Benny Landa.  The ink dries on the transfer belt but is transferred onto the paper while still warm and sticky.  So no bleed and thus better quality, and it works on almost any substrate.  Developed in partnership with Komori, these machines look like they have come from the future, with huge touch-screen control panels.  The range includes sheet-fed presses which can run at 13,000 sheets of B1 per hour (i.e. offset speeds - but with the huge advantage that each sheet can be different ...).
Landa explained how this research has also spawned a new technology, Nano-metallography.  This can produce metallic graphics for less than half the cost of the foil method, due to the fact that there is zero waste with the nano-metal nano-layers coating process - which is also simpler and faster than using sheets of metal foil.  Importantly, metallic graphics from this process do not conduct electricity, so they can be used on packaging that can be put in a mocrowave oven.
Landa has many other innovations from this nano-level world, with applications outside print - for example, in heathcare, among many other sectors.  Here is Benny Landa's explanation of just how small the nanoworld is: "Your fingernails have grown a couple of nanometres since I started this sentence."
The inkjet trend 2016
Alongside the thrill of nanography and the eminence of offset, Drupa 2016 was also about inkjet.  This technology has made its nest in the graphics industry.  In 2012 it was well presented; at Drupa 2016 it was predominant, and this was a milestone for the printing industry.  Almost all the leaders in print manufacturing had inkjet digital presses to the fore.
Testament to this success, Canon, Xerox, Konica Minolta and HP occupied much larger areas than traditional manufacturers.  The inkjet has the advantage of responding to market changes: shorter runs, customization, responsiveness and lower investment.  Even Heidelberg is expecting digital printing technology to deliver 20% of its turnover in the next few years, up from 10% currently.
Share this news item 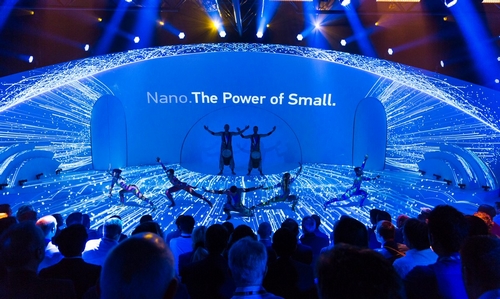