Color inkjet print volumes are expected to grow 23% in 2019 according to InfoTrends. The manufacturers are keenly aware of this forecast, and put the spotlight on their inkjet offerings at Drupa 2016.  No expense was spared in putting these machines to the fore - and this included Xerox and Konica Minolta.
Despite the fact that attendance was slightly down on Drupa 2012 overall, footfall on the Konica Minolta stand was up 25%.  The manufacturer invested heavily in the show with a stand of no less than 2400 m² (25,800 ft²).  The AccurioJet KM-1 was undoubtedly the star attraction of this stand, and Drupa 2016 was the official commercial launch for this innovative machine developed in co-operation with Komori.  This B2+ (750 x 720 mm) sheet-fed UV-cured inkjet attracted large and curious crowds to eyeball both the technology itself and the print quality on a wide range of stocks.  The KM-1 should help Konica Minolta customers expand into new markets such as book publishing and packaging or to better serve their existing markets.
The KM-1 is capable of printing up to 3000 B2+ sheets per hour (1500 in duplex mode) with a resolution up to 1200 dpi, and is the flagship for the Accurio hallmark at Konica Minolta (representing accuracy, advanced and automated).  Accurio is now prefixing all their digital inkjet presses - and workflow and other production solutions.
Not satisfied with the launch of the AccurioJet KM-1, the surprise was the next development in the series, the AccurioJet KM-C prototype.  C here might stand for corrugated and cardboard.   This is the first inkjet printing system developed from top to bottom by Konica Minolta, and it employs the same UV-curing inkjet technology as used in the KM-1.  Printing onto B1 format, the prototype on show was based on a flat feed platform allowing easy processing of substrates such as cardboard and paperboard.  The KM-C handles paper ranging from 0.3 to 1.2 mm thick and prints up to 2200 B1 sheets per hour.
Some of the manufacturer's partners were also honored on its stand, such as MGI Digital Technology (for example, the JETvarnish) and Otto Künnecke (and its chipped or RFID card distribution system).
For its part, Xerox has also invested in the market by presenting two new machines, the B3+ format HD Brenva and the continuous feed Trivor 2400.  Combining inkjet profitability and cut-sheet flexibility, the Brenva HD is designed to meet the needs of print providers present on small- and medium-volume direct mail markets, transactional printing and books. Based on Kyocera piezo technology with drop on demand and aqueous pigment inks, the Brenva HD can run at 197 ppm onto A4 and 87 ppm onto B3.
The Brenva HD has an inserter similar to that of an iGen system - indeed much of the feed and finishing components resemble an iGen.  In addition it has an in-line spectrophotometer for easy calibration and color profiling, and object-oriented color management to distinguish text, graphics and images, and optimize the picture quality of each item individually.
Watch this space for the rest of our trip to Drupa 2016.
Share this news item 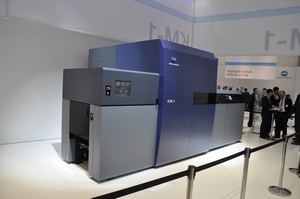