This week Lexmark International, Inc., announced the release of a new generation of A4 laser printers and multifunctions: the CS700 and CS800 printer series and the multifunction CX700 and CX800 series.

A total of seven new MFPs are coming, including the CX860. "A4 color MFPs continue to represent a very strong segment for worldwide MFP activity, with a high 10.5 percent growth rate expected throughout the forecast period" says Amy Machado, an analyst at the market research firm IDC.
Lexmark is highlighting that these new machines have very high-capacity toner cartridges, meaning fewer callouts for users.  One of the features of the new Unison toner is that it fuses at a lower temperature, thus consuming less energy.  They are equipped with a powerful print controller based on a quad-core processor and memory up to 3GB.
For A4 equipment, these printers are very fast. The CS725 and CS820 run at 47 ppm and 57 ppm respectively - at the same speed for black and white as for color.
The Lexmark CX700 and CX800 multifunctions will follow, and have extensive paper and finishing options.
The e-Task touch interface is also a major update.  Highly robust but touch-sensitive and running Android like a tablet, it can even be used wearing gloves.  The e-Task interface is available on the CX725, 820, 825 and 860 multifunctions but also on the CS720 / 725 and 820 printers.
Find more details very soon on your DMO portal.
Share this news item 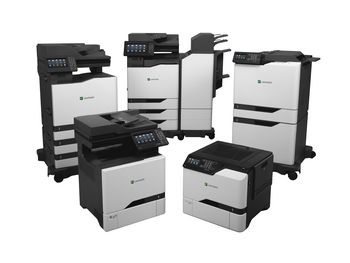