Along with Ricoh and Kyocera, Dell also announced the release of new machines this summer. The manufacturer has launched an A4 color printer (the S5840cdn) and two A4 monochrome printers (S2830dn and S5830dn). This range of "Smart Printer", for medium and large enterprises, will be sold on the North American market.
The Dell S5840cdn printer is aimed at large companies and organizations such as banks, schools or government offices.  It has a monthly print volume of 150,000 pages, with a total capacity of 2300 sheets - and can run at 50 pmm in both color and black and white.  There is a  quad-core 1.2 GHz processor inside and a 4.3 inch touch screen on the front.  WiFi is an option.  In both color or black and white, it also has a very low cost per page compared to its competitors.
The monochrome S2830dn printer is more for smaller workgroups.  With print speeds up to 40 ppm, this machine can deliver a first page out in only 6.5 seconds.  The color LCD screen is only a 2.4-inch one, but security has been enhanced with a PIN code system running off the keypad.
Like the S5840cdn printer, the S5830dn is a robust monochrome printer.  However it can run at up to 63 pmm, first page out is just 4.4 seconds, it has a maximum capacity of 4400 sheets, a monthly print volume of 300,000 pages and houses an encrypted 160GB hard disk.  The larger touch screen is available as an option, as if WiFi.
Share this news item 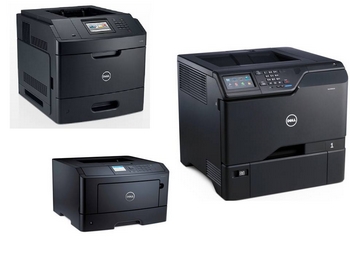