New ranges of MFP for Toshiba

On the design side, it's a total change.  All the new machines come in anthracite (a very dark grey), a serious look.  They also have a new 9-inch tablet-style interface.
The ten color models run at speeds from 20 to 75 ppm, and the nine monochrome machines from 25 to 85 ppm.  The fastest machines come with a dual-head scanner in the feeder, with a capacity of 300 sheets.   They all run an embedded OCR app.
In addition, the print quality of the machines has also been upgraded over their predecessors:  1200 x 1200 dpi, compared to 600 x 600 on earlier ranges.
Finally, they all run eBridge Next, the new print controller and OS.  One of the neat features of eBridge Next is that it allows the complete customization of the interface (screen, features, etc.).
Share this news item 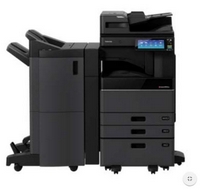