DataMaster at Drupa 2016, part 6/6: 3D Printing and other stuff worthy of note

3D Printing
According to estimates the worldwide 3D print market is worth 2.2 billion per year and is growing by 25% per year.  So, 3D printing had a prominent place at Drupa 2016!
The potential of this manufacturing technology should not be underestimated:  "More specifically, the mechanical engineering spare parts market and packaging design open great opportunities for producers and users of these machines - and also for print service providers," says Sabine Geldermann, Director of Drupa.  The Touchpoint 3D fab + print area in Hall 7A showed off the opportunities 3D printing represents, and the latest advances were being demonstrated by the numerous players in the field.  Our reporting team was entranced, and particularly by two Israeli companies pioneering 3D printing.
The first, Massivit 3D Printing Technologies, used the event to provide the first public demonstration of its new printer, the Massivit 1800. This large-format 3D printer is - according to the manufacturer - the fastest on the market.  It's big too:  it can produce high-quality parts up to 1.5 m × 1.2 m × 1.8 m!  It also relies on an innovative technology called GDP (Gel Dispensing Printing), which deposits melted filament layer by layer to produce a 3D object.  This is then fixed by photo-polymerization with UV. The Massivit 1800 can print up to 350 mm per hour.  So it takes so nearly 5 hours to print an object the size of an average human - but take it from us, that's still fast.
The second, Highcon, specializes in printing solutions for packaging companies, and they caused a sensation at Drupa by presenting an imposing 3D printer whose printing material is ... paper! Dubbed Highcon Shape 3D, this machine will be available on the market in 2019.  Born out of the print finishing world, with all its folding and cutton technologies, Highcon uses an additive manufacturing technology to create objects layer by layer using cut paper.  (It is however not the first to use this type of material since the Irish company Mcor Technologies were first to play with additive processes using paper.)
Other Equipment You Should Know About
MGI, now almost a subsidiary of Konica Minolta, presented the JETvarnish 3D Evolution, the first device in the world capable of selective varnishing and (foil) gilding B1+ sheets.  Production speed can reach over 4000 sheets of B2 per hour.  It also manages variable data, and each sheet can be customized in a single pass.  This machine is designed for the printing industry and is also suitable for the production of packaging and POS.
Heidelberg and Fujifilm have jointly developed an inkjet printing press, the Primefire 106. "In record time, Fujifilm and Heidelberg have jointly developed the first industrial digital inkjet press to the B1 format of the World" says Gerold Linzbach, CEO of Heidelberg. This release is based on Fujifilm inkjet technology and the German manufacturer's offset technology platform.  Aimed at commercial printing and the packaging industry, the Primefire 106 will be available in seven colors (CMYK, orange, green and purple) and clear varnish.  Capable of producing up to 5,000 sheets of B1 per hour in simplex mode, it is aimed particularly at companies in the consumer goods industry.  It will launch at the end of 2017.
Finally, the Esko stand had a wide range of innovative software from their X-Rite, Enfocus and MediaBeacon acquisitions.  Six axes were distributed on a 900m² stand (and yes, they were giving out maps).  It's worth listing these just to show you how far and wide Esko's reach is these days:
- Brands, specifications and synthesis
- Design
- Graphic design and photogravure
- Flexo Platemaking
- Printing and ink formulation
- Finishing
Drupa 2016:  1837 stands from 54 countries and 260,000 visitors from 188 countries.
Despite talk of going tri-annual, they are not.  Bookings are being taken for June 2020.  See you there!
Share this news item 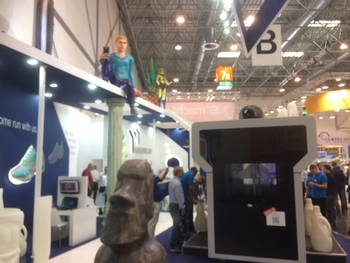