Sharp sale may be coming to a conclusion ...

The future of Sharp Electronics continues to make headlines.  The latest cliffhanger is that a new offer has been put on the table by Terry Gou, CEO of Foxconn.  His offer is 5.35 billion Euros, 6.3 billion dollars, on the table until February 29th.  If accepted, and it does seem likely that it will be, this would be  the largest foreign acquisition in Japanese history.

Sharp has had a hard time making its LCD screen technology profitable in recent years - though Sharp's business is much broader than just screens.

According to the Japan Times, Mr Gou has said the deal is "90 % done."  It would appear that Sharp Corp. prefer the offer from Taiwanese Foxconn over what the Japanese semi-public INCJ investment fund has proposed.  It is a better deal financially, includes the strategic benefits in terms of screen manufacturing  - and most importantly, Foxconn have said they would want to retain Sharp Corp. as a whole, whereas INCJ would break it up.

Tune in later this month for the next thrilling installment in this saga! 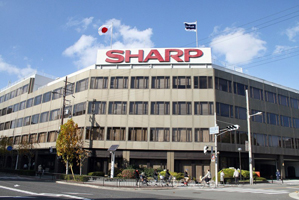