Under the strapline Reinvent the Power of Print, HP Inc are rolling out not just the 54 models we set out in our news of April 10, but how they envisage the way the machines will be used, supported and secured.
The big launch is in Chicago today September 11.  We were priveleged to get a preview last week from Stephan Schmitt, Head of Product Management, HP Office Printing Solutions.
HP Roam
A personal print queue in the cloud, allowing users anywhere to print any time, anywhere, "removing the shackles of time and location."  The plan involves universal print drivers, so you can pull your print job to any convenient printer, GPS-based location discovery (helping the user find a printshop), and comes in both enteprise and SMB editions.
HP Solutions Hub
Addressing falling print volumes, this a strategy intended to retain and increase the importance of paper as a "value-added part of digital workflows," with platforms tailored for key verticals such as healthcare, finance, and administration.
The HP Solutions Hub will include an open development platform, as well as tools for fleet deployment - and an online connector marketplace.  We like the emphasis on context analysis in content workflows, and the emphasis on easy development and paths to market, and simple management.
Key for long-term success in this new paradigm of 100% cloud-connected users and printers - will be printer uptime, and print (content) and printer (device) security.
HP Inc will be rolling out Smart Device Services 2.0 in Spring 2018.  "Devices that never go down," is the strap for SDS 2.0.  Smarter machines will enhanced remote support, and the printers themselves will be able proactively alert support teams, predicting failures and allowing service calls to be better optimized - and stocks to be smaller.  Component and consumable lifetimes will be lengthened.
HP are keen to extol their leadership in print and printer security.  Feeding in from their pedigree in server and PC leadership from years gone by (they were the first to roll out encrypted print traffic), HP are now the first to roll out several security features we have hitherto only seen in computers, such as run-time intrusion detection, and local or distant management of both BIOS and firmware anomalies.  Overkill?  Not in the world where everything is accessible to everyone else.
So, to the machines themselves.
Three quarters of the entire high-end scanner portfolio will have been changed by the end of the year.  We note that prices do not seem to be going up as fast as scan speed (up to 240 ipm) and duty cycles.  Many run OCR, the HP software development platform OXP, and the ultrasonic Everypage feature, the key to productive archiving.  With substantially enhanced computing power, they run their software features much faster, increasing OCR output by up to 400%, for example.
In addition to the Pro-class PageWides launched in 2016 and earlier this year, five more MFPs and printers are launched today, with speeds from 45 to 75ppm.  The MFPs are the PW Ent Color MFP 780 dn (up to 65 ppm), and the PW Ent Color MFP 785 f, zs and z+ which all run at up to 75 ppm.  A further nine models are being added to the Managed Devices portfolio.
HP Inc's analysis and presentation of both the solutions and systems for delivering them in the future is both slick and credible.  And the new machines are suited for both modern vendors and the users of tomorrow. 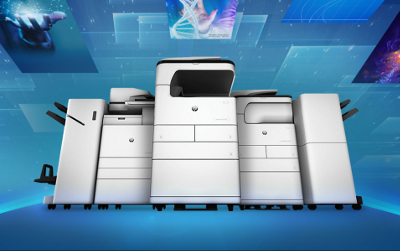