HP prepares to fire a broadside: 54 all-new A3 MFPs coming your way!

HP Inc. is launching its all-new range of multifunction printers of 16 new A3 MFPs and A3 printers (3 inkjet printers and 13 lasers). This range will be available in a total of 54 new model references offering different finishing options, such as stacking, integrated stapling, hole-punching or booklet finishing.  The toner models are the first Samsung-made printers to be sold under the HP brand since HP acquired Samsung's printing arm in September 2016.
These color and monochrome A3 MFPs pull together all the HP technologies that they have recently unveiled in the print world.  This includes the (inkjet) HP PageWide technology in machines ranging from 40 ppm to 60 ppm (or even 80 ppm in general office mode) and HP LaserJet engines ranging from 25 ppm to 60 ppm.
HP PageWide technology is intended to provide color printing at a low price.  According to the manufacturer, PageWide can cut energy consumption by a factor of 7 compared to competing laser equipment - and also generates less packaging waste thanks to long-lifetime, simpler consumables.
Security
HP is presenting the new machines as the most sophisticated ever in terms of meeting business security concerns.  For instance, there are three significant new security functions which can automatically trigger a restart in the event of an attack or an anomaly:
- If the bios appears to have been altered, a safe version of the bios is used for restarting.
- If an abnormality is detected in the firmware, the device restarts in an offline security mode.
- A real-time intrusion detection device protects the machines operating on a network.
Sure Start technology and other built-in security features further enhance the security of these MFPs.
These multifunction printers also benefit from HP Smart Device Services, a cloud optimization platform for monitoring and diagnosing maintenance points. In order to optimize machine availability and costs, this service (for example) anticipates part replacements, which can help to avoid premature changes of ink or toner cartridges.
HP's stated strategy is to "disrupt" the copier channel.  In the same way HP sells computers, these 54 references will be sold direct on the internet: http://www8.hp.com/en/printers/a3-multifunction.html. They become available between spring and summer 2017.
HP hopes that these new MFPs will enable it to increase its share in this market - worth 55 billion dollars worldwide.
Share this news item 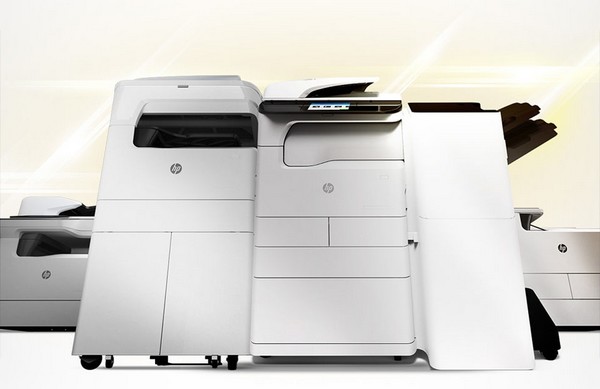