Xerox is busy: Five new models and a new version of ConnectKey

Following the release of the Xerox C60 / C70, Xerox news sites are brim-full this month:  Xerox is to launch a new version of its ConnectKey platform - and five new models of multifunction printer.

Among the new features offered by version 1.5 of ConnectKey, there is compatibility with MOPRIA standard mobile printing plus the ability to reorganize or show / hide the features of the MFP interface home screen.  The manufacturer is also announcing improved response of the touch screen.

No less than five new models have been launched.  For A3, the Xerox WorkCentre 7970 (pictured) confirms the trend observed in recent years: that of a rise in productivity for office color machines.  This engine has a maximum speed of 70 A4 pages per minute, either in color or black and white.  Built on the same hardware platform as the WorkCentre 78xx series, the WorkCentre 7970 also has new finishing options including the engineering fold (half-Z-fold on A3) and three-fold (C and Z) for A4.

Xerox is further extending the monochrome segment with the WorkCentres 5945 and 5955, based on an entirely new print engine using LED technology.  With their lateral paper path and the lack of a waste toner bin, these machines should be easier to use in everyday life than their predecessors, the WorkCentre 5845 and 5855.  But the current 65 to 90 ppm models (WorkCentres 5865, 5875 and 5890) remain on catalog.

Find all the details on these products in Your DMO soon. 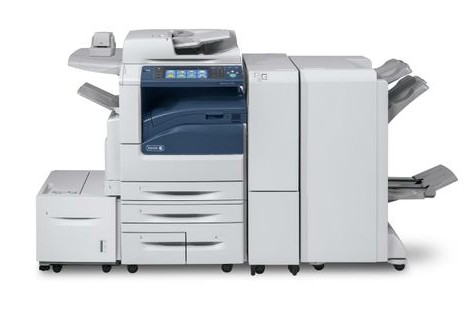