Earlier this year Toshiba and Oki launched three color A4 machines running at 28, 34 and 40 ppm.  The monochrome versions e-Studio 477s and e-Studio 527s (Toshiba models) and MB760 and MB770 (Oki model references) running at 47 and 52 ppm respectively will be out very shortly.

All these machines have an LED-based motor designed by Oki, and Toshiba's e-Bridge X controller.  They have the same touch-screen interface as the latest A3 MFPs launched by Toshiba in 2013.

With the high speeds in the specs, the platform which lends itself to third-party developments and the overall range of options (stapling, high-capacity trays), these machines are clearly aimed at the high end of the A4 market - and will offer their users the kind of features usually only available to A3-device users - but with a smaller footprint. 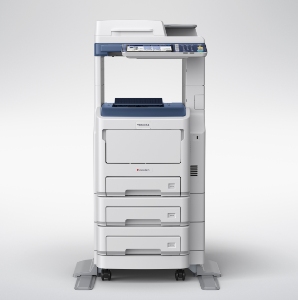