Updated versions of the bizhub C454 and C554, this new set of A3 color multifunctions has got the same kind of improvements which distinguish "e" and "non e" versions of the C224, C284 and C364.

The manufacturer continues to push down the electrical consumption in standby mode, which gives these new models a lower TEC (typical electricity consumption) figure.

The interface has the tablet-style slider features the 9-inch screen can provide.  Options for customization are provided by the web server, navigator and script interpreter which are all hosted by the MFP - though in reality it is probably only large companies wanting to place their brand even on their copiers screens who are likely to make the most of these customization features.

In the US this combination of web server / navigator / script interpreter has given rise to an online store for bizhub apps which can run directly on these MFPs (i.e. not on a server).  The bizhub MarketPlace is a site from which apps can be bought or downloaded for free, just like Google Play or the App Store.  Among the apps available are a connector to Twitter and an RSS feed app which deliver content directly to the MFP screen (both are free apps), apps for customizing the way job scheduling is displayed and even a connector to Sharepoint.

Lastly, remember that the new 'e' models, with appropriate options selected, allow users to scan directly to editable Office Open XML formats: you can scan straight to Word, Excel (new) and to PowerPoint (available in the earlier version).

All the specifications of these new machines will be available on Your DMO very shortly. 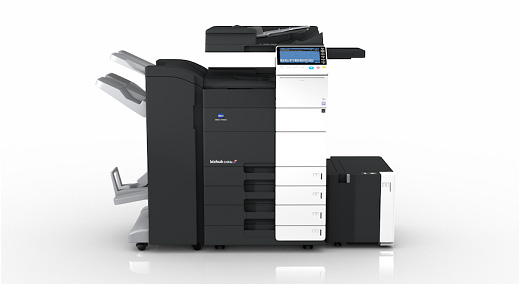