At the Info to Doc Exhibition in Paris last week, your DataMaster correspondents were privileged to be shown an advance release of version 5 of Nuance’s eCopy ShareScan Suite, which has now been released.

This is hot news – eCopy is already the highest-selling scan-to-workflow suite of software, and well placed to remain so.

The breadth of coverage increases up- and downstream. There is now support for the majority of MFPs and scanners on the market – and specifically Ricoh, Konica-Minolta and the Xerox EIP, with HP to follow in the spring, we were told. eCopy 5 offers over 100 connectors to LOB applications arranged in packages to suit needs and budgets.

The look and feel have changed in the new release. Going along with general development trends, the eCopy 5 user interface is organized rather like MS Outlook. Under the hood it’s all new too – this software is based on the .net framework (contributing to, among other things, better security and network integration).

It’s highly customizable for desktop users and for process-specific modifications which can easily be dropped to MFP screens from the admin console. Forms processing is even further enhanced.

Nuance eCopy is now even better placed to dominate this marketplace, as it can quickly be set up on networks of mixed-make MFPs, and the .net migration will further broaden its appeal among IT departments and 3rd party developers. 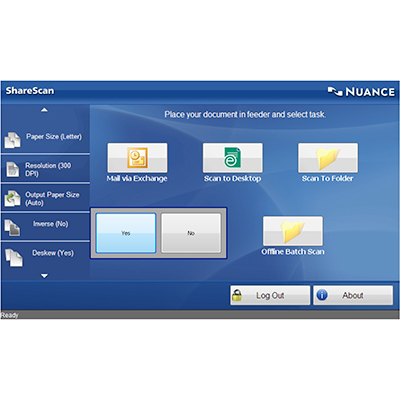