Xerox announces the replacements for the DocuColor Series 200

On 4th October 2010, the American manufacturer announced the launch of the Color 550 and 560, to replace the DocuColor 200 series.
In an effort to standardize their range, the brand is using a design common to the last machines released in 2010 (WC7120, WC7545 and WC7546), notably as regards the touch-screen interface based on a similar design to that of the majority of recent equipment.

These machines have improvements over the earlier range:
- SRA3 format as standard in one of the front trays
- coated media supported
- high-capacity double tray (4,000 sheets)
- future finishing options

These two printing machines are effectively a mix of the two Xerox series already well known on the graphic art market:  the DC200 series and the DCP700.On DMO soon! 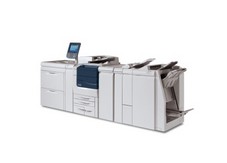