The japanese manufacturer has just replaced its 30 ppm monochrome MFP KM3040 by the new TASKalfa 300i, with a new design common to the TASKalfa releases since january 2009.

The new TASKalfa 300i integrates the external stapling finisher available on the 420i and 520i recently launched models.

It features a frontal USB port accessible from the color touch screen interface which enables direct scanning in a USB key.

The TASKalfa 250i (25 ppm - b&w) should now soon be released. To be confirmed...
Click here to discover this machine 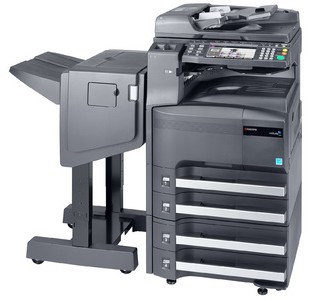