Your two intrepid reporters returned from Drupa with suitcases full of information, iPads full of photos and videos, pockets full of contacts and their heads full of exclusives.

Numerous new machines were being presented at this exhibition; ever more advanced, a surprise at every corner.

As regards digital presses, Konica-Minolta were leading with the PRO 951 (A3 monochrome at 95 ppm) and a prototype of the PRESS C1100 (A3 color 100/100 ppm) which will launch in 2013.
The PRO 951 has several enhancements over the PRO 950 it replaces:  9,000 sheets input, 1200 dpi resolution, LED technology and options to run up to 350 gsm.
As regards the upcoming PRESS C1100, look forward to a new kind of toner, a new fuser unit and several features of the PRESS C8000 launched in 2010.  Plus, as opposed to the 80 ppm machine, this new press will maintain productivity on heavy paper weights due to the new fuser unit.
To see this new press in action at Drupa, click here.

Deep in offset territory, Hall 4, we found a brand new Fuji Xerox 4-color inkjet machine on the Caldera stand.  “It doesn’t have a reference yet, but we call it Lightning.”  Here’s why:  it gives 1600 x 1600 dpi at 580 m2 per hour (42 inches wide) and will print on a huge variety of formats.  Drop size can be as low as 1.3 pL, by far the smallest in wide format.  It has a Fuji motor, and they got trusted partner Caldera to do the RIP.  They are testing the water by showing the device well away from the Xerox hall, and the prototype is off on a small tour of Europe after Drupa.  Assuming positive feedback from dealers and interested parties, the machine will launch first in Asia at the end of 2012.
Xerox staff were very enthusiastic about this machine, and gave us a very warm welcome.
We filmed this prototype in action: the most expensive output tray in the world

Other items of interest were :
-Canon were showing their high-volume machines out since 2009 or 2010 (iR Advance C9000, iR Advance 8000, ImagePress C7010vp, ImagePress 1135), plus a large section on workflow.  Helix is due to be reintegrated into Uniflow.
-Konica-Minolta were showing the new BizHub C654/754 and unveiled the KM-1, a cut-sheet B2 inkjet machine with options for coated stocks due to the UV ink
-Océ had the impressive VarioPrint 6320 (monochrome 314 ppm press)
-Ricoh were showing off the new-ish Pro C651/C751 family (75/75 ppm color press) with a wealth of finishing unit options.  The Ricoh workflow section was very impressive too, as they continue to buy up developments to include in Total Flow.
-Xanté had a converted Oki office device running 650 gsm !
-Kyocera were at Drupa for the first time showing their most recent models, and a new toner composed of 30% renewable biomass.

The biggest splash at Drupa was on the fringes of our world, but of great interest:  the new technology from Mr Landa.  The inventor of Indigo has a new ink offering, he says, variable data and other digital features at offset prices.  As an offset engineer remarked, "If it's true what he says, we can all go home." Check out the 3 metre touch screen. 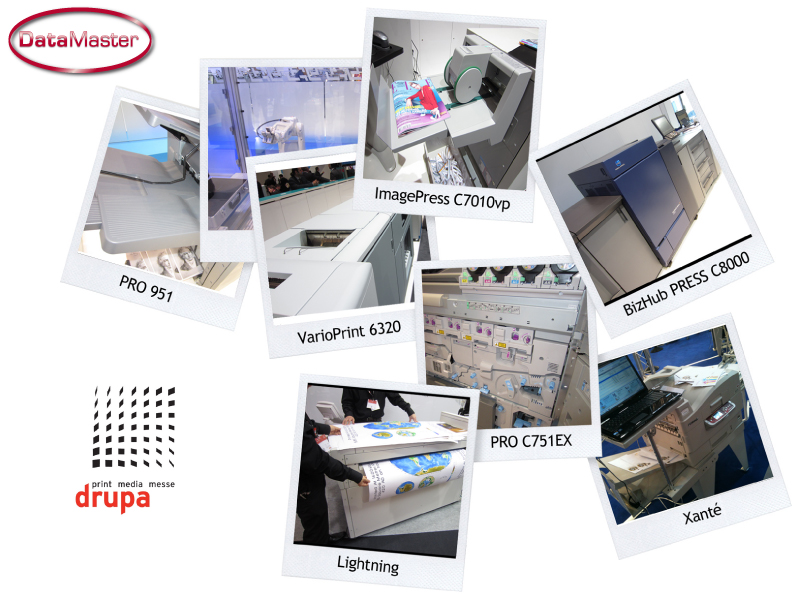