Sharp has just launched seven new SRA3/12x18” color MFPs, and will shortly be releasing another fifteen!  All the MX machines (26 – 45 ppm, color and monochrome) will be replaced by BP references - that’s all the nn51, 61 and 71 machines, even the “S” variants that only came out earlier this year.
There will be an Advanced series, and an Essential series.  This month (April) the BP-70C31, BP-70C36, BP-70C45, BP-50C26, BP-50C31, BP-50C36 and BP-50C45 will be launched.
"With the launch of this new A3 color workgroup product line, Sharp continues to Invest in its product offerings with leading technology, features and value," says Shane Coffey, vice president, Product Marketing, Sharp Imaging and Information Company of America. "We are proud to offer the new Advanced and Essentials Series workgroup document systems, which offer leading, competitive features and outstanding performance."


Plus there are multiple improvements and upgrades.  5 GHz Wifi is now supported; the 10.1 inch interface is no bigger but has been reworked; standby electrical consumption is now super low; and there are numerous security enhancements, including firmware control.
Run Smart comparisons of these new machines against their predecessors and competitors on Your DataMaster Online!
Share this news item 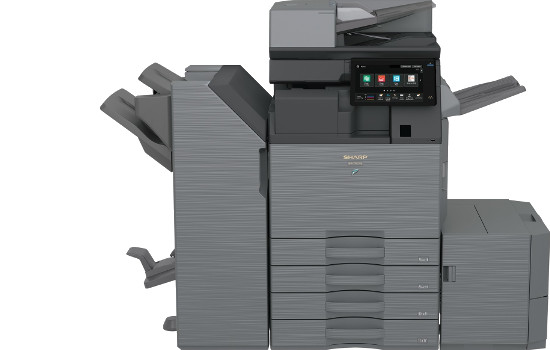