A new range of Fujitsu office A4 scanners was launched on Tuesday, February 15.  The fi-8000 series replace the successful fi-7000 machines.
Fujitsu have applied for no less than 32 patents while developing this new range.  Top of the list of new features is the Clear Image Capture technology, which Fujitsu are launching in this new range.  The fi-7000 machines had CCDs, and we found in our independent lab tests that they delivered some of the best colour depth, contrast and fidelity on the market.  The new machines have standard CIS but the new Clear Image Capture process uses 3D colour conversion to deliver high colour fidelity, high definition, and all this at reduced levels of power consumption, up to 42% less electricity, even though they run faster ...
... Across the range of quite compact office A4 scanners, speeds have been increased.  For each speed, there is an alternative product with a flatbed scanner integrated under the main body of the machine.
The fi-8150 is a 50 ipm (100 ipm in duplex) scanner which replaces the 40 ipm fi-7140.  The version with the flatbed, the fi-8250 replaces the fi-7240.  The rest of the range follows the same pattern: fi-8170, fi-8270, up to the 90/180 ipm fi-8190 and fi-8290 models.
Users may no longer opt for the flatbed though - as the new range can scan 7mm-thick passports through the main feeder.  The 50 ipm machines require the optional plastic carriers, but the 70 and 90 ipm machines can scan a passport without the carrier sheet.
The new feeder can hold up to 100 sheets, and is packed with enhancements and new features for handling originals both fast and with care.  Fujitsu's patented Image Monitoring system can identify documents which are badly skewed and stops the machine to prevent the originals being damaged.  iSOP on the faster machines does the same based on sounds emanating from the feeder.
Check out the full specifications of the machines on your DataMaster Online!
See the product pages and other documents 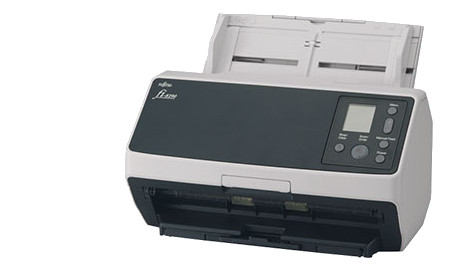