It's not suprising to see a lot of changes in the B&W range three years after the WC5200s were launched.
The print server has been substantially improved, with a better CPU, more RAM and a bigger hard disk.  PS3 is still an option though.
The new feeder can handle 110 sheets (instead of 75), but the bypass capacity is halved to only 50.
Finally, text PDF has been added to the scanning functions.

Soon on Your DMO:  technical specifications and +/- for the range! 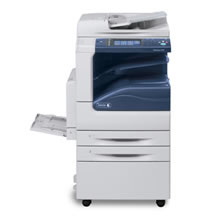