Xerox renews its A3 ColorQube range

In terms of productivity, we note also that the scan speed has been increased too.

The Xerox controller has been updated with a more powerful processor and a hard disk with double the capacity.

The new products also have a USB port on the front face, allowing users to both scan to and print from a USB key.

Another new feature is the abaility to regulate color within the driver without having to modify the original document.

Lastly, it is also worth noting that the lifetime of the maintenance kit has been lengthened, which will mean maintenance in general and the number of service calls and can be reduced.

You can find all the details on the new range in the subscriber area of DMO! 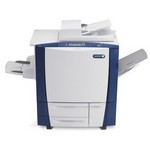